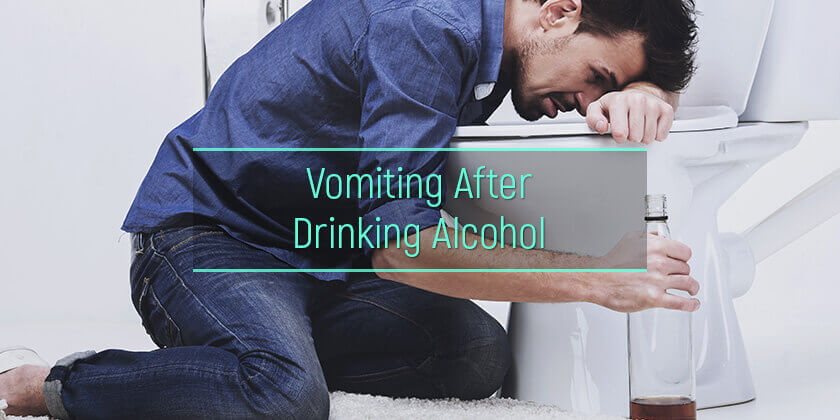 Alcohol vomiting is a common problem experienced after drinking. In the majority of cases, excessive vomiting after drinking alcohol is associated with drinking too much, but this is not always the case. Some people start feeling sick after drinking small amounts of alcohol or when properly pacing their drinks. Sickness can come on directly after drinking or as late as the day after. Because we associate vomiting with consuming adult drinks, this may not seem concerning, but in some cases, it can be.

Causes of Vomiting After Alcohol

Those who have alcohol intolerance do not need to drink to excess to get sick; alcohol intolerance vomiting can begin after a single drink. Some are born with this intolerance, naturally experiencing things like sickness and alcohol allergy rash, while others may develop this with time or due to the use of medication. The vomiting is caused by the immune system attempting to protect the body by expelling the drinks that triggered the allergy. 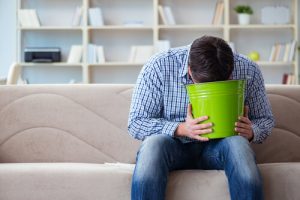 In some cases, a drinker may have other health issues that make the body respond to the presence of adult beverages with sickness. In this case, the answer to “why does alcohol make you vomit?” will depend on what the comorbid health issues are. For example, someone with gastritis might have ulcers in their stomach, and the irritation caused by the presence of liquor may cause reactionary vomiting. Those with the reduced liver function may be unable to filter out the toxins quickly enough, inducing alcohol poisoning even without drinking to excess. Anyone suffering from an illness should research how it can interact with adult beverages before drinking.

Finally, if the drinker is mixing adult drinks with other substances, including prescription and illegal drugs, it is possible for vomiting to be triggered. While this is not alcohol poisoning per se, it is an indication that an overdose may be occurring. Anyone who is using prescription medication should research how their medication could interact with liquor, beer, and wine. Those using street drugs should seek rehabilitation treatment.

In the majority of cases, alcohol and vomiting indicate minor sickness that can be addressed at home. However, sometimes vomiting after drinking signals a significant problem that requires medical intervention in order to avoid serious complications, including death. Below are signs that a person needs to be taken to the emergency room without delay.

It can be tempting to dismiss these signs of a problem. For example, alcoholic vomiting blood may just assume that they went a little too hard that day and promised themselves to do better in the future. However, it is vital that these signs are never ignored. When observing any of these signs, seek emergency medical treatment immediately.


Helping Someone Vomiting After Alcohol

For those who are experiencing drinking-induced vomiting or who are wanting to help someone who is, there are some basic steps to take. It is important to keep in mind that these steps are only meant to address the sudden sickness; if the person is addicted and experiencing similar medical events on a regular basis, they need additional help, such as drinking addiction treatment.

The steps to help someone vomiting after drinking are as follows:

Keep in mind that vomiting does not always start immediately. Many will start vomiting after drinking alcohol the next day. In this case, it is usually part of a hangover and should be treated as such. At this time, it is possible to check for signs of a larger problem as well. For example, someone experiencing alcohol memory loss may be suffering from a binge drinking disorder and require medical assistance.

If the person starts vomiting again after a day or more of not drinking, it might indicate severe physical addiction. This is alcohol withdrawal vomiting. If this is noticed, the person requires medical alcohol detox.

After any emergency medical situations are addressed, it is time to start thinking about getting help. Those who vomit from drinking on a regular basis are likely battling addiction. They could be genetically predisposed to it, using it to medicate, such as social anxiety and alcohol, or it might have arisen due to participating in party culture that encourages heavy and frequent drinking. No matter the root of the addiction, treatment is required. Luckily, there are many treatment centers for alcohol addiction in the United States.

AlcoRehab » Side Effects of Alcoholism: Long and Short-Term Outcomes of Alcohol Consumption » Vomiting After Alcohol: Why Drinking Makes One Sick