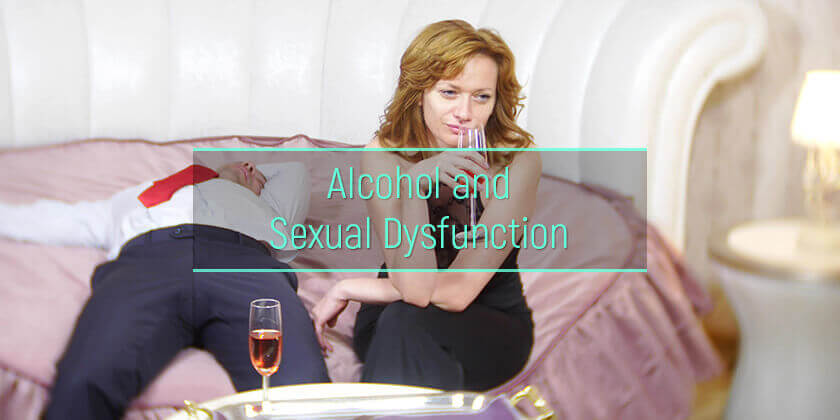 Alcohol is one of the most common forms of entertainment in the current world. Among things that alcohol is credited for is its ability to make sex better. However, as much as alcohol and sex seem like a great idea, its effects need more scrutiny. Learn how sex and alcohol relate in order to understand the effects it could have on individuals and how to break from the shackles of alcoholism.

The truth is that alcohol and sexual performance have no positive outcome.  Its users might have more sex, but that is a question of quantity over quality. These effects of alcohol and sex can be felt by both men and women.

Alcohol has both short term and long term effects on men. These dramatic effects caused by drinking alcohol before sex are a real concern. The quality of sex a man has while intoxicated is far much reduced than they would have if they were sober.

This quashes the alcohol sex drive notion as a myth as the physical effects of alcohol is not something any man would want to experience.

Some of the physical effects on men include:

Long term erectile dysfunction has been observed in people who indulge in its excessive consumption.

It is evident that alcohol and sexual performance in men do not bring out the best results. The worst part is that these effects go further than simply affecting their sex life. This would, therefore, constitute the need to seek who wish to avoid or beat its effects in their sex life.

Women also experience certain effects caused by its excessive consumption. While the effects might not be as many as men’s, they still warrant to be looked at. The questions to be answered in this section, therefore, is “does alcohol affect sex in women?”

Among the most visible effects on sexual performance in women include:

The effects on women could easily be avoided if responsible indulgence is emphasized.

When it comes to sex, the effects of alcohol surpass physical effects. In the beginning, it simply works to lower one’s inhibition which then leads to them indulging in irresponsible sexual behavior.

People tend to have unplanned and, or unprotected sex and contract sexually transmitted infections due to lowered inhibition. One tends to let their guard down and indulges in sexual behavior without really looking at the consequences that they would naturally avoid had they been sober:

Overall, one should seek professional help as soon as they discover that they are becoming overdependent on alcohol. One common sign of alcohol dependency is alcoholic tremors, which is a sign of withdrawal symptoms.

It is possible to seek treatment for drinking in both men and women. The good news is that one can always seek out the best alcohol treatment facilities in their area.

AlcoRehab » Side Effects of Alcoholism: Long and Short-Term Outcomes of Alcohol Consumption » Alcohol And Sex: Ethanol Effects On Erection