Excessive alcohol consumption leads to numerous health problems such as liver damage, stomach issues, impaired cognitive function, insomnia after drinking alcohol, dizziness, and more. If alcoholic beverages are consumed in large quantities over a relatively short period of times, most health problems can be cured relatively easily using special treatment and by quitting drinking. However, if one abuses alcohol throughout many years, this doesn’t only lead to liver cirrhosis, but also a condition called alcoholic dementia. This health condition usually results in improper neurological functioning and serious cognitive issues.

Can Alcohol Intoxication Cause Dementia?

Alcohol dementia can appear to people of all ages, regardless of gender, height or body type. It can result from consuming alcoholic beverages in great quantities, including beer, wine, liquor, spirits, and more. Drinking small amounts of alcohol doesn’t lead to this dangerous medical condition, so having a few drinks per week is considered to be safe. 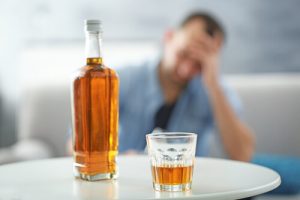 Alcohol-induced dementia can be acquired if one gets intoxicated with alcohol regularly. This type of intoxication depletes the nutrients in the body, causes brain damage and seriously affects the function of major organs such as liver, kidneys, pancreas, and more. Each person’s body can handle alcohol intoxication differently, but ultimately too much alcohol can lead to serious health conditions.

It is quite common for certain people to start abusing alcohol and some of the most predisposed persons are teenagers drinking, pregnant women, business professionals, and veterans. Various psychological factors also contribute to acquiring alcohol-related dementia as well as how prone is one person to get a mental illness. If one starts to abuse alcohol regularly (to get rid of stress or avoid facing life issues), this is a surefire path towards dangerous alcohol-related health problems, including alcoholic dementia. In many cases, alcohol abusers try to rationalize bad drinking habits and don’t try to stop drinking because, at first glance, they appear to function properly and have normal lives. However, increasing the dose of alcohol is very easy, and this can lead to major health problems.

The alcoholic dementia symptoms are varied, and this health condition can be influenced by two important factors such as Wernicke’s encephalopathy and the Korsakoff syndrome.

Wernicke’s encephalopathy is a health condition encountered in patients who lack a certain substance called thiamine. The thiamine deficiency is usually caused by excessive drinking as well as vomiting. If one abuses alcohol regularly, the body’s thiamine stores will get depleted fast.

The Korsakoff syndrome is a special type of condition which translates through frequent episodes of depression, confusion, inability to speak normally, memory problems, and others. Alcohol and dementia are strictly related in this case because too much alcohol prevents normal neurological functioning which leads to dementia, a serious brain condition that can affect people of all ages who abuse alcohol.

To clarify things, people who get tipsy once a week by having a few beers or glasses of wine with friends are less prone to develop common alcohol dementia stages. On the other hand, if one gets intoxicated with alcohol regularly, has the symptoms of hangover almost daily, vomits frequently and feels dizzy most of the times, this can lead to alcohol-related dementia. 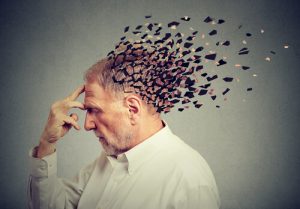 e are several symptoms which can be easily identified and might indicate that one suffers from this health problem. For example, headaches, frequent anger episodes, mood swings, slurred speech as well as memory gaps are serious signs of alcoholic dementia. Having regular alcohol blackout symptoms while drinking is also dangerous to the human brain and acts as a contributing factor to this condition.

Elderly alcoholic dementia is a closely-related condition which affects elderly people, and the health effects of alcohol are worse when coupled with other neurological illnesses such as Alzheimer’s disease or Parkinson’s disease. This combination of brain issues might be incurable and are known as alcohol-induced psychosis.


The Start and Progression of Alcoholic Dementia

Dementia caused by alcoholism can appear to people of all ages, and it usually starts as a result of abusing alcohol regularly for many years. Alcohol addicts develop the Wernicke’s encephalopathy first, and then this causes the Korsakoff syndrome. Ultimately, the serious memory problems caused by Korsakoff syndrome will lead to alcoholic dementia. The process takes time to develop, but it can be an incurable disease. The Wernicke’s encephalopathy appears because heavy drinkers lose thiamine from the body as a result of frequent and long binge drinking episodes. Most alcohol addicts do not replenish this vital substance (either through diet or supplements), and as a result, alcoholic dementia can appear.


How to Treat and Prevent Alcoholic Dementia

Alcohol dementia treatment can be quite stressful for patients to undertake, but it is necessary to prevent more dangerous health problems and even death. The alcoholism treatment consists of IV therapies and infusions which attempt to reestablish the proper nutritional balance of the body. Patients need to stay in clinics or hospitals for certain periods where they will be closely monitored and treated. Alcohol must be avoided at all costs during the treatment period, a thing which most alcohol abusers find very hard to do. This happens because alcohol addicts have become so used to this toxic substance that the body craves it regularly. Alcoholism support groups are very helpful in these cases.

Dementia from alcohol abuse can also be treated with Thiamine therapy which brings the much-needed nutrients (thiamine, also known as vitamin B1) back into a sufferer’s body. This treatment improves the neurological functioning of the patient and prevents dementia from advancing to more dangerous stages. Patients must also receive proper counsel from professional therapists to discover the root causes of their alcohol addiction and to eliminate them. If proper treatment is administered on time, alcoholic abusers might have a chance of living an alcohol-free and happy life. The rehabilitation facility for alcoholics is the best option to contact to learn more about the recovery process.

AlcoRehab » Side Effects of Alcoholism: Long and Short-Term Outcomes of Alcohol Consumption » The Basics of Alcoholic Dementia and How to Identify It