The short-term effects of alcohol can be quite benign and are not always negative. Most adults will not experience any detrimental effects from one or two drinks, even if they drink every day, and slowly become a social drinker. It is when the amounts consumed increase consistently and tolerance develops that problems may start to occur. Alcohol abuse can lead to dependence, diagnosed as alcohol use disorder in the Diagnostic and Statistical Manual (DSM-5). Long-term effects of alcohol abuse and dependence include domestic violence, driving under the influence, and other forms of destructive behavior.

The Short-Term Effects of Alcohol

One drink corresponds to a four-ounce glass of wine, a 1.5-ounce shot of liquor or a 12-ounce can of beer. This level of consumption is completely safe and may even reduce the risk of cardiovascular disease and alcohol-induced dementia. Short-term effects of higher doses vary depending on the drinker’s weight, gender, and other factors, including the alcohol allergy. The positive effects of alcohol are undeniable. They include a sense of profound calm and relaxation, which neurotic persons crave. Inhibitions will typically decrease, one becomes less concentrated, reflexes get slower, response time increases, and coordination worsens. All these effects are brought about by a slowdown in brain activity and begin to manifest after having more than three or four drinks. In rarer cases, people can be affected after one single drink, especially if it is the first in their lives or they have some comorbid disorder as it happens in bipolar alcoholics.

The short-term effects of alcohol include:

Stomach pain, nausea, or diarrhea: Alcohol irritates the stomach lining, triggering these effects. Note, that these symptoms may indicate the development of alcoholic gastritis.

Relaxation: Most people feel calmer and happier when they drink, which is why many turn to liquor when they feel stressed or sad. They become more animated and talkative.

Impaired vision and hearing: Alcohol is a depressant, and slows the nervous system down as such. Since the CNS controls motor and cognitive functions, people will demonstrate longer reaction times. More pronounced effects include slurred speech, clouded eyesight, and dulled hearing. Sometimes these alcohol effects on eyes can become apparent even after just one drink, which is why it is dangerous to drink and drive.

Weariness, sleepiness: This is part of the substance’s calming effect. Sleepiness sets in after the initial euphoria wears off. However, the reverse effect called alcoholic insomnia is also possible.

Poor self-control, clouded thinking: By impairing CNS functionality, alcohol makes one less reserved and more likely to engage in behavior that may seem out of character. One is more prone to break the law or engage in risky sexual activities, like unprotected sex, when under the influence. We know it is unwise, and costly, to call 911 for a medically illegitimate reason, but quite a few people do this when they are intoxicated. Among the negative effects of alcohol are “munchies,” with people being refused service in restaurants if they are drunk, and 911 calls have been made by prospective customers in these situations.

Memory impairment: The effects of drinking alcohol on memory are well-known and also caused by lessened nervous system activity. Impairments can culminate in alcohol blackouts, with the person having no recollection of events that transpired after a bout of drinking. The other terrible side effect is delirium tremens.

Mood swings: The initial “high” soon wears off, giving way to depression. This sometimes leads people to keep drinking, and mood swings can ensue. Sometimes these are very severe – depression in persons dependent on alcohol may eventually lead to suicide attempts with varying outcomes. Famous chef and TV personality Anthony Bourdain, who allegedly struggled with alcohol and drug addiction, is a tragic case in point.

Some short-term effects of alcohol can be fatal, and binge drinkers are particularly at risk. Binge drinking is defined as excessive drinking within a short period – 4 or more drinks in one sitting according to the Centers for Disease Control and Prevention (CDC). Alcohol poisoning occurs if the blood alcohol content reaches a toxic level, resulting in hangover symptoms, which is more likely to happen if a beverage of poor quality is consumed. Poisoning is a medical emergency and is fatal if left untreated. The following symptoms can manifest:

The Long-Term Effects of Alcohol

Alcohol’s long-term effects can include liver damage, depression, cancer, immune system disorders, high blood pressure, reduced sexual performance in men and loss of sexual desire in women, or pancreatitis. Cognitive disorders may occur over time in people who have been drinking alcohol every day. Side effects of this habit include irritability and increasingly poor performance at work due to alcohol, or in school. Alcohol abuse negatively affects kidneys causing severe damage. Long-term abuse can cause cirrhosis, a severe liver disease that requires a liver transplant in 33% of all cases in the US. Almost 50 percent of all people nationwide who die of cirrhosis abuse liquor. This can also cause nerve damage. The dangers of underage drinking are even more severe. The other long-term effects also include the so-called dry drunk syndrome, when a person experiences the effects of alcohol poisoning without having to drink alcohol at all. With long-term use, people develop tolerance, where the body becomes used to higher and higher amounts. This makes it possible to consume dangerously high quantities without experiencing the short-term effects of alcohol that might otherwise lead one to stop.

The Effects of Alcohol on Women

Alcohol affects women differently than men. Gone are the days when it was generally believed only men had drinking problems. More and more women than ever are abusing liquor today – statistics show that about 5.3 million women in the country drink in a way that is seen as dangerous to their safety, health, and well-being. The National Highway Traffic Safety Administration reports that a woman’s blood alcohol level is high enough to increase the risk of a fatal car crash by more than 100% after one drink on an empty stomach. “There’s the impression out there that drunk driving is strictly a male issue, and it is certainly not the case,” says Rae Tyson, administration spokesperson. “There are some parts of the country where the majority of impaired drivers involved in fatal crashes are female.” 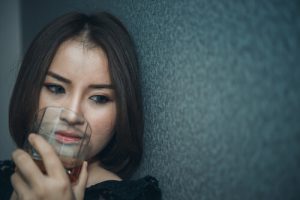 Alcohol side effects on the male and female body are markedly different. According to experts, binge drinking and chronic heavy drinking put women at a much higher health and safety risk than men. Women who get drunk more than double their chances of falling victim to sexual assault or physical violence. Data indicate than 50% of sexual assaults reported in the country involve the woman, the man, or both members of a family of alcoholics. A study carried out in Norway showed that spouses who consumed different amounts were more likely to divorce than those who drank comparable amounts. This was especially true for relationships, in which the wife was a heavy drinker. Alcoholism effects on women are more pronounced. Long-term drinking is much more dangerous to women’s health – women are more likely to die of cirrhosis or suffer from brain disease, heart disease, or breast cancer. Children of women who drink during pregnancy are at risk of being born with Fetal Alcohol Syndrome (FAS), a lifelong developmental disorder that manifests as abnormal facial features, stunted growth, alcohol-induced brain damage, and emotional impairment.

Diabetes and cognitive impairment are two possible long-term effects of alcohol. Chronic consumption of liquor leads to a higher risk of developing diabetes. It causes obesity, because alcohol is very high in calories, and damages the pancreas, which secretes insulin. Long-term abuse of this substance can also trigger learning difficulties and memory problems. It puts one at a higher risk of developing mental conditions like depression and anxiety. It can also trigger Wet Brain Syndrome, a neurological disorder related to thiamine deficiency that is quite common in addicts. Four out of five alcoholics suffer from WBS according to the National Institute on Alcohol Abuse and Alcoholism. As heavy drinkers are prone to neglect their diets, they often develop a deficiency of thiamine. Left untreated, WBS causes permanent brain damage.

Most negative long-term effects of alcohol are health-related, but there are exceptions. Sexual abuse, rape that occurs after heavy drinking, aggravated assault, rash driving, and robberies or thefts committed under the influence affect the alcoholic’s loved ones, friends, and even total strangers, with whom they come into contact. Physical and cognitive impairment due to alcohol abuse racks up billions of dollars in losses every year.


Harmful Effects of Alcohol and Addiction

Addiction is present when the body is unable to function optimally without alcohol. The brain cannot send the right signals to the body when it becomes accustomed to alcohol’s long-term effects. When a person has become dependent, they will continue to drink regardless of any physical or psychological symptoms drinking may have caused. What is more, a person who has become addicted will keep drinking even if they suffer a job loss, panic attacks, a breakup, or are arrested for behavior related to consumption. One also faces an increased risk of becoming dependent on other drugs because they crave the “high” that drinking brings. Inability to rationalize and loss of inhibitions also make people more prone to experiment with illegal drugs and lead to many social consequences of alcohol addiction.

Addiction is a physical disorder that requires medical treatment. The effects of alcohol withdrawal are dangerous and potentially life-threatening. Medical treatment starts with detoxification. Ideally, this is followed by treatment in an inpatient or outpatient rehab facility, where patients get help to attain long-term sobriety. Of all substances, alcohol is abused the most, but it is also the most treated according to a 2017 survey from Recovery Brands. Almost 70% of those surveyed received treatment for alcohol abuse or addiction, and 52.87% reported seeking treatment for a related problem. At any rate, the short- and long-term effects of alcohol are believed by experts to cause the most extensive harm of all other drugs.


Effects of Alcohol: Types of Treatment

In an inpatient rehab center, patients receive therapy and intensive counseling to help find positive ways of coping with the stress that led them to start abusing alcohol. Treatment begins as soon as detox is over. These treatment programs last for a minimum of 30 days. They can continue for up to a year. The best rehab centers are located in quiet, peaceful areas where patients can focus on recovery. Therapists at these rehab centers for alcohol abusers encourage patients to continue with outpatient treatment after their stay is over. One is also encouraged to join a support group, such as Alcoholics Anonymous.

AlcoRehab » Side Effects of Alcoholism: Long and Short-Term Outcomes of Alcohol Consumption