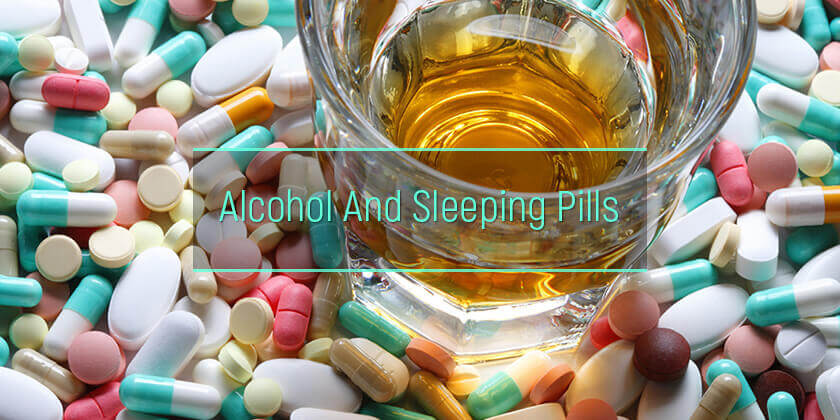 Millions of people around the world take prescription or over-the-counter medication to induce or maintain sleep. These drugs are very effective in curing insomnia in the short-term. However, they can have potentially dangerous interactions with other substances. Can you take sleeping pills with alcohol? Mixing sleeping pills and alcohol is not recommended due to the effects of drugs and alcohol on the brain. Both these substances have a powerful sedative effect which when added up can prove fatal.

Doctors usually warn against mixing certain prescription drugs with drinks, for example, oxycontin and alcohol. The combination of OTC medications like Zyrtec and alcohol can also cause problems. There are warnings on sleep aid labels about mixing them with alcoholic beverages because the combination can lead to a cessation of breathing and death. An additional concern is that ethanol and some sleep aids are highly addictive, putting the user at risk of substance use disorder. Let’s find out more about the dangers of mixing alcohol and sleeping pills.

OTC and prescription sleep aids are a godsend for people struggling with insomnia. However, drinking alcohol with sleeping pills is not recommended. Just like alcohol and barbiturates, this combination can have serious side effects and even potentially be fatal. According to the National Institute on Alcohol Abuse and Alcoholism (NIAAA), mixing medications such as Lunesta and alcohol can cause side effects such as:

Drinking even one alcoholic beverage while taking a sleep aid can be dangerous and even potentially fatal. In addition to a higher risk of blackouts, there is a risk of death from sleeping pills and alcohol overdose.

Alcohol Mixed With Sleeping Pills: What Does The Research Show?

Doctors advise never to mix sedatives and hypnotics with ethanol. The effects can be as dangerous as MDMA and alcohol. Research shows a combination of sleep aids like Silenor and alcohol can amplify the sedative effect of both, resulting in an increased risk of overdose. A great deal of data is not available on the combined use of these two drugs, but here are some findings from studies on drinking and insomnia drugs use: 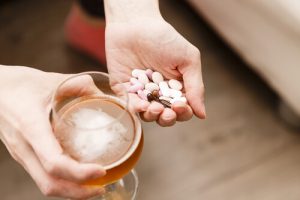 Risk Of Overdose: Can Alcohol And Sleeping Pills Kill?

The combination of OTC sleeping pills alcohol dramatically slows down the central nervous system. It also has a significant impact on the functioning of major organ systems in the body. The risk of overdose is substantially increased when alcohol and Ambien are used together because they cause severe sedation for an extended period. In addition to the risk of alcohol and sleeping pills death due to overdose, there are other dangers. The slowed function extends to other systems, including the respiratory system, with a potentially fatal slowing down of breathing.

The combination also results in some psychiatric effects and unusual behaviors of which the person has no recollection. There are reports of violent outbursts, hallucinations, and amnesia, all of which predispose the individual to accidents and injuries.

A common method to commit suicide is from an overdose of some type of pills in combination with alcohol, for example, Klonopin and alcohol. Sleeping pills and alcohol suicide is another cause of death from the combination of these substances, both of which are easily accessible to most adults.

Alcoholic beverages have extensive effects on nighttime sleep as well as daytime sleepiness. Research shows that in healthy people, heavy drinking causes sleep disturbances. In people with insomnia, small amounts of ethanol may be beneficial and serve as a sleep aid, but the sleep is less likely to be restful. Does the combination of OTC sleeping pills and alcohol improve sleep quality? Can it induce a restful sleep or does it lead to disturbances and poor quality of sleep?

Sleep medications are sedative hypnotics that start working immediately and induce sleep soon after they are ingested. They act by relaxing the muscles and nerves. Ethanol also slows down the nervous system and affects reaction time and motor function but has a more delayed effect. What happens when one takes sleeping pills with alcohol? Mixing the two can result in deep sedation. However, the sleep induced by them is often disturbed by sleepwalking episodes and other bizarre behaviors. A person may drive a car, have sex, eat food, or talk to someone with no recollection of it the next day. Therefore, the combination of sleep aids with ethanol is never a good idea.


Millions of prescriptions for sleep aids are written every year, and alcoholic drinks are easily available to adults. This causes many people to become addicted to some type of sleeping pill and alcohol. Both are powerful substances that can create physical and psychological dependence. Trying to quit can result in serious withdrawal symptoms, which is why it’s important to seek the care of professionals in one of the rehab centers.

Stopping both drugs together can result in rebound insomnia. The use of sleeping pills for alcohol withdrawal can help ease this symptom. However, it is imperative that this is done under medical supervision. The best way to stop drinking and abusing insomnia medicines is under the guidance of a doctor for safe treatment from alcohol and sleeping pills addiction.

AlcoRehab » Why Is It Dangerous To Mix Alcohol And Drugs? » Sleeping Pills And Alcohol: Suicidal Dangers Of Mixing