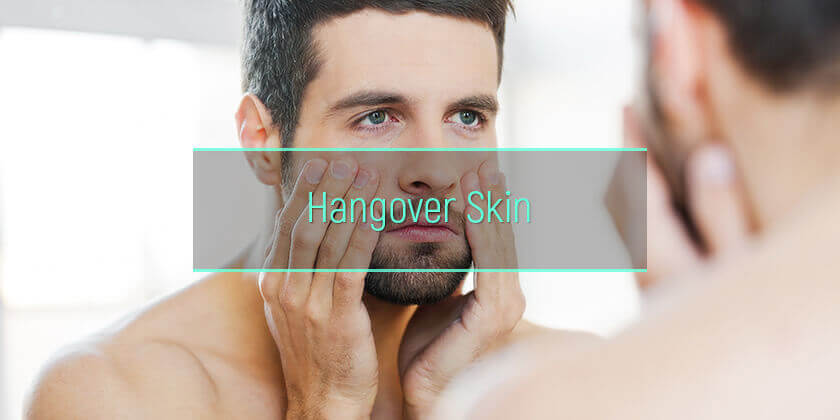 A hangover seems to be a way of reminding people about the dangers of overindulgence in alcohol. While many are busy tending to common issues like hangover-induced diarrhea, nausea, headache, and fatigue, there’s another major organ that needs some TLC – the skin.

What Is Skin Hangover?

A skin hangover is a group of unpleasant signs and symptoms commonly observed in the face and body 24 hours after drinking excessive amounts of alcohol.

The effects of alcohol may differ from one person to another. Why don’t some people get hangovers? That would depend on several factors. Generally, the less a person weighs the less alcohol it takes to cause a hangover.

Red rash, hot skin after drinking alcohol is very common. This facial redness appears because the regulation of vascular control in the brain fails with continuous liquor intake.

Transient flushing with itchy burning skin after alcohol is yet another sign of a hangover.

Acetaldehyde, the main breakdown product of alcohol, causes flushing by stimulating the release of histamine.

Skin tenderness after drinking alcohol may also be observed along with redness. This is due to the dehydrating effect of liquor in the body. When the body is dehydrated, the skin and other vital organs will try to hold onto as much water as possible, causing puffiness in the face and elsewhere.

There are several ways by which drinking too much booze can cause skin problems.

Though alcohol allergy is rare, the reactions can be severe. Some people are allergic to other compounds present in alcoholic drinks. Common allergens would include rye, barley, wheat, yeast, grapes, and hops.

The body’s immune system will over-react when it comes to contact with any of these triggers. It will produce antibodies known as immunoglobulin E or IgE, prompting an allergic reaction.

Common symptoms of an allergic reaction would include swelling and skin itching after drinking alcohol.

While one can sweat out alcohol for toxin elimination, drinking too much booze can still cause dehydration in many ways. Alcohol can decrease the body’s production of anti-diuretic hormone (ADH), which affects water reabsorption.

As soon as the body becomes dehydrated, vital organs are given priority. Connective tissues like collagen are being compromised. They immediately stop receiving water when supply is low.
Aside from having a dry skin which tends to peel off, when collagen is not well hydrated, its strands crack and adhere altogether. This causes hangover symptoms like the formation of wrinkles.

If one lacks sleep, he or she may have sallow skin and puffy eyes. Chronic sleep loss can cause fine lines. Lack of sleep also boosts the release of hormones like cortisol. Too much cortisol can break down collagen, affecting smoothness and elasticity.

Sleep loss also decreases the release of human growth hormone, which is important to keep the skin’s normal thickness and in tissue repair.

Alcohol replaces normal food in the diet. The normal process of digestion is likewise affected, hence resulting in malabsorption. With less calorie or protein intake, one may suffer from a hangover and expect dry skin after drinking alcohol due to loss of elasticity.

Several vitamins are essential to keep the skin healthy. A deficiency in vitamin A will result in dryness and rough follicles.

Lack of vitamins B1 and B2 will cause a greasy skin after drinking alcohol, red and inflamed tongue, cracked corners of the mouth, and rashes on the face that appears like seborrheic dermatitis.

A deficiency in vitamin B3 or Niacin will present with 3 D’s – dementia, diarrhea, and dermatitis on sun-exposed areas.

Patients with zinc deficiency will complain of itchy hands and feet hangover.

Sebum can mix with dead skin cells, debris, and bacteria. This can easily result in acne or itching and bumps on skin after alcohol.

Liver disease is just one of the worst consequences of alcohol. One common skin changes due to liver disease are spider telangiectasia. It is associated with elevated estrogen levels. Blood vessels radiate out in all directions from a central blood vessel, hence showing blood spots on skin after drinking alcohol.

Bilirubin is an orange-yellow substance produced during the normal breakdown of red blood cells. Its metabolism is impaired in cases of acute and chronic liver diseases, causing jaundice. The skin turns yellow after drinking alcohol. 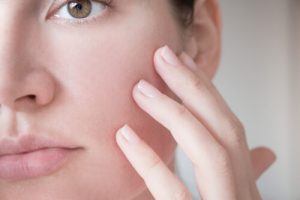 Effects Of Veisalgia On The Skin

Excessive drinking has been associated with the development of several skin disorders. It is likewise a predisposing factor for necrotizing wound infections, delayed healing, and cellulitis. There are many theories about the causes for such skin diseases like malnutrition, immune suppression, liver diseases, or the influence of alcohol on lipid metabolism.

Ethanol also has a stimulatory effect on human keratinocytes, which may be one of the reasons why psoriasis can be precipitated by alcohol misuse.

Alcohol has a direct effect on cutaneous vasculature. Erythemogenesis is also being enhanced due to increased permeability. This explains the hangover feeling of burning skin after drinking alcohol.

The carcinogenic properties of ethanol may also be transported via the bloodstream to more susceptible organs, hence a probable cause for some cancers.

Ways To Fight A Skin Hangover

While pharmacological treatments are necessary to get rid of hangover headache and other common symptoms, fighting a skin hangover can be achieved naturally.

While drinking plenty of water is a great move to treat a hangover, the effects of that internal hydration won’t easily show up on the skin. For a quick fix, use a sheet mask that contains hyaluronic acid, a molecule that can help draw more moisture. This will surely help control dryness and puffiness.

Grabbing a caffeinated drink will help constrict the blood vessels, tamping down signs of hangover and swelling. However, note that caffeine is a diuretic, so make sure to drink even more pure water to maintain the balance. The caffeine in facial creams will also be helpful.

Experiments show that clear liquors like gin and vodka cause fewer hangover episodes than dark ones like tequila, red wine, and whiskey. Dark liquors contain congeners like methanol, which produces metabolites that are more toxic, hence causing the worst hangover ever.

Alcohol intake in moderation in combination with appropriate water and food intake may help control skin hangover. Wait out skin problems with the cures mentioned above.

However, skin problems are not the biggest issues caused by excessive alcohol consumption. Ethanol is a highly addictive substance, and its abuse requires appropriate treatment. The centers specialized at alcohol addiction provide the best assistance in overcoming the dangerous practice.