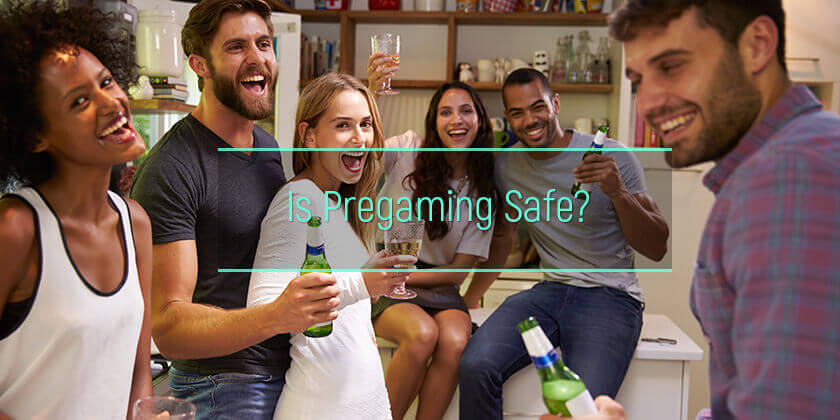 Pregaming is the process of getting drunk before going out on social events. Pregaming synonyms are pre-drinking and pre-loading. People make drinking cost-effective by mixing hard liquors and cheap beers.

Though pregaming is usually done before a gig, it can likewise precede other group activities like sports. Pregaming before a date is also becoming popular.

Pre-drinking is commonly done by young adults under 21 years old, mostly college students, in the US and Europe.

In the 1900s, pre-drinking became popular in the US after Mothers Against Drunk Driving pleaded the federal government to force states to increase the legal drinking age to 21.
Pregaming also rooted out from laws banning happy hours and discounts on alcohol.

Pre-drinking minimizes the cost of getting alcohol at local clubs and bars and reduces the hassle associated with faking IDs to be given permission to consume alcohol.

The motives for a pre-game are many. The very high cost of bar tabs and the lack of money for leisure are just two of the major factors that have led to an increased rate of pregaming. Others also do predrinking to reduce anxiety before starting the night’s entertainment.
It gives people a chance to socialize and enjoy more easily without the loud noise in clubs. There is more freedom and convenience because there are no club rules to follow. And of course, many do pre-drinking just to conform, which differentiates a social drinker from alcoholic.

Several studies have reported the prevalence of pregaming among college students. Focus groups looked into ten colleges and universities in Pennsylvania. Results showed that 71% of drinkers engage in pregaming in the two weeks before the study.
In another investigation, 98% of 1327 college students across nine US universities confessed that they pregame at least once a month.
As published in the Los Angeles Times, experts believe that 65-75% of young adults engage in pregaming before they go out.
These statistics consistently show that pregaming is now a common practice among college student drinkers in the US. 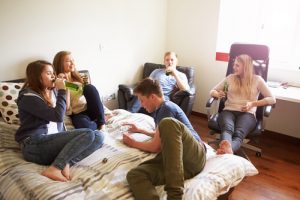 Pre-gaming alcohol is usually done by a small group of people because they wanted to have more fun.
Alcohol can increase the levels of dopamine in the brain. This “feel good” chemical boosts endorphins in the body, creating a joyful, pleasurable, and euphoric effect.

There are several kinds of pregaming drinks. Some of the most favorites are:

Things That People Do When Pre-Loading

Pregaming drinking games are a mainstay when there are pregaming drinks. The most popular one is beer pong, also known as “Beirut.” It consists of two teams with two members standing at the opposite sides of a table. One each end sits a pyramid of 3 or 4 plastic cups filled with cheap beer. Each group will throw a ping pong ball into their opponents’ cups. If a ball lands in the cup, the other group has to drink that beer and remove the cup from the pyramid.
Card games are also a staple in every pre-game. A good game is Kings. It starts by circling out cards in a table, each card face down. Players handling their own drinks will take turns in picking up a card. Each card has its own meaning, usually in some kind of rhyme to remember easily. For example, if somebody gets a six, all “chicks” will have to drink. The number eight usually means a “date,” and the player gets to choose another person to drink with.
Aside from games, pregaming music is what makes the gathering all the more fun.

Pre-drinking can overburden the body systems and cause blood alcohol content to spike easily. This can cause several unintended consequences.

A hangover is the sum of unpleasant psychological effects brought about by heavy consumption of alcoholic beverages during a pre-game. One may experience nausea, headache, lethargy, dysphoria, sensitivity to noise and light, and thirst after the alcohol starts to wear off. While a hangover can be experienced any time, it is most common in the morning after a night party. Aside from the above-mentioned symptoms, there can also be heightened feelings of anxiety and depression.
Aside from drinking too much alcohol, there is also an increased risk for a hangover if one mixes drinks like homemade moonshine, which is common in pre-gaming. Downing different types of alcohol during pre-game is a risk factor.

With high-risk drinking during pre-drinking, alcohol concentration can increase in the brain. It goes up to a level that can depress brain parts responsible for respiration and consciousness. This can cause alcohol addicts to lapse into a coma and die.
Alcohol can depress nerves that control involuntary actions like the gag reflex. If this does not function normally, there is a risk of choking that can also kill an unconscious drinker.
Common alcohol poisoning signs include vomiting, blue lips, cold and clammy extremities, fainting, fewer than eight breaths per minute, or breaths spaced by 10 seconds or more.

According to the National Institute of Alcohol Abuse and Alcoholism, there are two types of blackouts due to alcohol.
A partial blackout happens with just a relatively small amount of alcohol. One may forget things that a normal person can recall easily.
A complete blackout refers to a time when one forgets everything for a specific duration. Judgment and cognition are affected.
Ethanol affects certain areas of the brain that can cause memory problems. As to how much alcohol is needed to cause a blackout or memory loss, it would depend on several individual factors like weight.

People who cannot think and behave well because of alcohol intoxication after a pregame are more prone to suffer from risky behaviors like fights, accidents, and even unprotected sex.

Alcohol consumption has been negatively associated with school performance. Problems commonly experienced by students include missed classes, falling behind in their school works, perform poorly on projects, and lack of time to review for the exams.

Pregaming Can Cause Alcoholism

Pre-drinking has been shown to predict alcohol-related issues broadly.
People who do pregaming report higher levels of alcohol consequences. Generally, there is heavy drinking tendency among college students who engage in pre-loading.
The goal of saving money by pre-drinking does not work for many. Students want to lower the cost of buying booze, but they tend to drink just as much as they would at clubs or bars than if they do not pre-game. They take in more alcohol than intended.

Pre-gaming does not lessen or replace the amount of alcohol that students will drink at a party but instead increased their risk of suffering from serious health consequences caused by wanting more drinks or addiction.

In some cases, alcoholism therapy options may be necessary.

How to do pre-gaming safely?

Listed below are some of the most effective safe drinking tips to remember before pre-loading.

Never drink alcohol or do pre-gaming on an empty stomach.

By lining the stomach with food, metabolism of alcohol will be delayed, hence absorbed at a much slower pace.

Alcohol can cause dehydration, so be sure to drink up during the day before heading out for a pre-game.

Mixing drinks during pregaming is not a good idea because it makes it difficult to track the number of standard drinks one has already consumed. Combining alcohol with energy drinks can also reduce the subjective experience of being intoxicated. The stimulating effects of ingredients like caffeine can have a masking effect. People will not feel so drunk, but their motor skills are already affected.

In case pregaming went too far and the professional help might be needed, there are alcohol treatment institutions available to provide advice and assistance.

AlcoRehab » What is Alcoholism? A Complete Guide to Alcohol Addiction » Pregaming Alcohol Drinking: What Is Preloading?