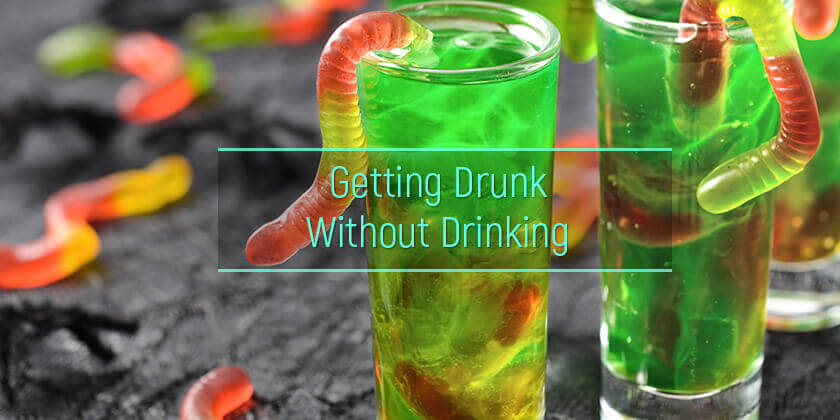 Ways to Get Drunk Without Drinking

Finding alternative ways to consume ethanol is common amongst those suffering from problem drinking, as it makes it easier to mask their disease. Depending on the method of ingestion, it can hide the smell of alcohol on the breath, avoid having bottles around, and make the process quicker, reducing the risk of being caught. As a result, it is also common in those who engage in underaged drinking. So, what are some ways people consume spirits without actually drinking them?

While it is common to use certain alcohols and wine when cooking, this is not the type of consumption that will leave someone feeling drunk without drinking. Rather than using alcohol to enhance flavor, eating spirits is about consuming enough liquor to get buzzed or drunk quickly and without drinking. In fact, this might be the most commonly used solution to how to feel drunk without drinking. Some edible alcohol options include:

Keep in mind that any recipe that contains alcohol, even if just for flavor, will retain at least some of its alcohol content; the idea that alcohol cooks off is a myth.

Another manner alcohol is sometimes consumed is through the nose. Snorting alcohol allows the body to consume the drink quickly and achieve a powerful buzz. However, choosing to snort alcohol is also extremely dangerous, with many warning that it could prove fatal. Instead of being metabolized by the liver, the alcohol goes straight to the brain, which makes it easy to overdose. People have been known to snort both liquid and powdered alcohol.

Vaping, in general, has become something of a craze in recent years; thus it is no surprise that people have found ways to vape alcohol as well. Vaping ethanol became mainstream when bars started offering “vaportinis,” but there are at-home devices that make it easy for anyone to vape alcohol at home and get drunk without drinking a drop. A candle is used to heat alcohol and produce vapor, which is then inhaled, often through a straw-like device. The alcohol is less concentrated than when snorted, but there are similar concerns regarding how the alcohol is metabolized, as well as the added concern over how it harms the lungs.

For those looking to hide their consumption, injecting alcohol can seem like a logical step to take. Alcohol acts on the body by getting into the bloodstream, so injecting it directly into the veins sounds like a quick way to get drunk without drinking. However, this is incredibly dangerous. Because a significant amount of ethanol instantly floods the system, it makes alcohol poisoning highly likely to occur. There are also issues regarding the impurities in alcohol entering the bloodstream without being filtered by the digestive system and concerns regarding the cleanliness of needles and the injection site.

Another manner in which drinkers might attempt to speed up ethanol processing is by putting into direct contact with the mucous membranes of the body. The practice is incredibly painful, and as a result, tends to be used more like a party trick than a way to consume alcohol while keeping consumption hidden from others. It is also associated with ocular injuries.

Tamponing and enemas are other methods for using the mucous membranes to absorb alcohol at a faster rate than drinking it. With tamponing, a tampon is soaked in the beverage and then inserted into the vagina or anus. With enemas, alcohol is injected into the rectum and held in by the user for as long as possible. In addition to being dangerous, these methods are not much more effective than simply drinking alcohol as the stomach also contains mucous membranes.

Some drinkers use sublingual absorption as an alternative to drinking alcohol. For this method of consumption, alcohol is held inside the mouth for an extended period of time, keeping the tongue up so the liquor can come into contact with the membranes on the bottom of the mouth. Ultimately, this is not a method used by those attempting to hide their consumption as it produces the distinct odor of alcohol on the breath and holding the substance in the mouth makes it more likely to get caught in the act. Instead, it is used by drinkers whose stomachs can no longer handle ethanol but who still wish to get drunk.

Finally, another way to get drunk without drinking liquor is to consume household products that contain alcohol. Examples include rubbing alcohol, hand sanitizer, cleaning products, and cough syrups. Because these are not meant to be drunk to achieve a buzz, doing so is dangerous, and the risk of death is high. Getting drunk on household products should be avoided at all costs. 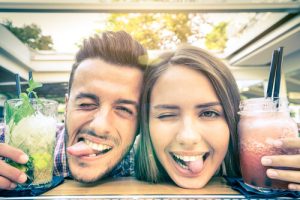 Getting Drunk Without Alcohol

It is one thing to get drunk without drinking, but how to feel drunk without alcohol at all is another thing entirely. Believe it or not, it is possible. Many alcoholics know how to get a buzz without alcohol, allowing them to engage in troubling behavior while convincing themselves they no longer have a problem. Two ways they do this are through consuming drugs that mimic the effects of drinking and by drinking mocktails.

Alcohol is a depressant that targets the neurotransmitter gamma-aminobutyric acid (GABA). This means that any drug that is also a depressant targeting GABA can cause someone to feel like they are drunk without drinking. Benzos are the class of drugs most often targeted for ways to get drunk without alcohol. The problem with this is twofold. First, alcoholics are trading one addiction for another. Second, these drugs present a high risk of overdose and other negative effects on the body.

Mocktails are cocktails without alcohol. The classic mocktail is the Shirly Temple, often served to children at restaurants, so they feel included while their parents imbibe. However, these have gotten more sophisticated in recent years with restaurants and bars offering non-alcoholic versions of drinks like mojitos, margaritas, coladas, and more. These substitute drinks for alcohol can cause the drinker to feel as though they are buzzed.
What makes you feel drunk without drinking? These drinks do this by triggering the placebo effect. While this may sound harmless as no alcohol or drugs are consumed, for alcoholics, it is not just the substances they use but the behaviors they exhibit that are problematic.


Medical Conditions That Cause Drunkenness

Those who suffer from auto-brewery syndrome have guts that naturally cause fermentation of certain foods, making the person drunk just from eating. This condition is incredibly rare and not well understood. However, it is being researched more and more, and there is speculation that it could be a factor in sudden infant death syndrome.

Nitrogen narcosis is a condition specifically found in divers. It is caused by breathing compressed air and diving to depths of 100 feet or more. This produces an effect similar to drunkenness. However, it does not produce actual alcohol in the system the way auto-brewery syndrome does.


Why People Try to Get Drunk Without Drinking Alcohol


Getting Drunk Without Drinking and the Development of Alcoholism

The biggest short-term risk of getting drunk without drinking is alcohol poisoning and death. However, the greatest long-term risk is the development of alcoholism in those not already suffering from the disease. Because alternative methods of getting drunk tend to cause drunkenness to come on faster and more powerfully than simply drinking, they can easily overwhelm the system and make the body feel dependent on the presence of alcohol. Anyone engaging in problematic alcohol habits should seek the help of an alcohol rehab clinic in getting healthy.
The hardest part of getting help is admitting there is a problem. Once the drinker accepts this, finding help is easy. There are numerous options for treatment for alcohol abusers across the United States. Patients can choose from inpatient and outpatient options as well as multiple approaches to therapy. Whether looking into how to help an alcoholic husband or wife, a child, or a friend, the right solution is out there.