The beer has been around for quite a while, and although the alcoholic drink is just better refined these days and sold in much more acceptable packaging, it’s nearly as old as the modern man. From the taverns in the castles of old to the pub and bars of today, beer has always been around.

Considered by some to be the most widely consumed drink in the world, beer is made by a process called brewing which involves the fermentation of the starch content of materials, usually grains of cereal. Most producers of beer are fond of using malted barley for their fermentations, but there are alternate sources of the starch in food crops such as rice, wheat, corn, etc.

Drinking beer can have moderate health benefits, such as:

Beer is alcoholic in nature and the effects of beer alcoholism are not lost on a lot of people but are the effects just restricted to that – the alcoholism and the hangover after?  Many studies seem to think this is not the case, with some extolling it for its great benefits while others are condemning it and consider it something to be rid of, even going as far as urging people to give it up entirely.

The advocates for beer have undergone extensive research to highlight various reasons why beer is beneficial to our health. This has succeeded in altering some perspectives on beer and beer consumption. These reasons are valid provided that beer is consumed moderately at about one can of beer daily. This way, it is believed, you would be keeping beer alcoholism in check and enjoy only the positive effects without developing an alcoholic behavior. Some of the health benefits of beer are:

Sure enough, these studies have just focused on only the moderate drinkers of beer and not on those that consume can after can to the point of beer alcoholism. This means that there is very wide room for anomalies to arise from excessive consumption of beer. It is important to know them to prevent alcohol addiction.

It is common knowledge that beer has a way of making fools of people that is very peculiar. While there would be the argument that every other brand of alcohol does the same thing, beer has its own funny way of messing with the human body both physiologically and psychologically. Asides from some of the benefits that can accrue from beer consumption, beer can have equally negative effects on the health and some of the most critical ones are hereby highlighted:

Short-term effects of drinking beer include:

The long-term effects of drinking beer include: 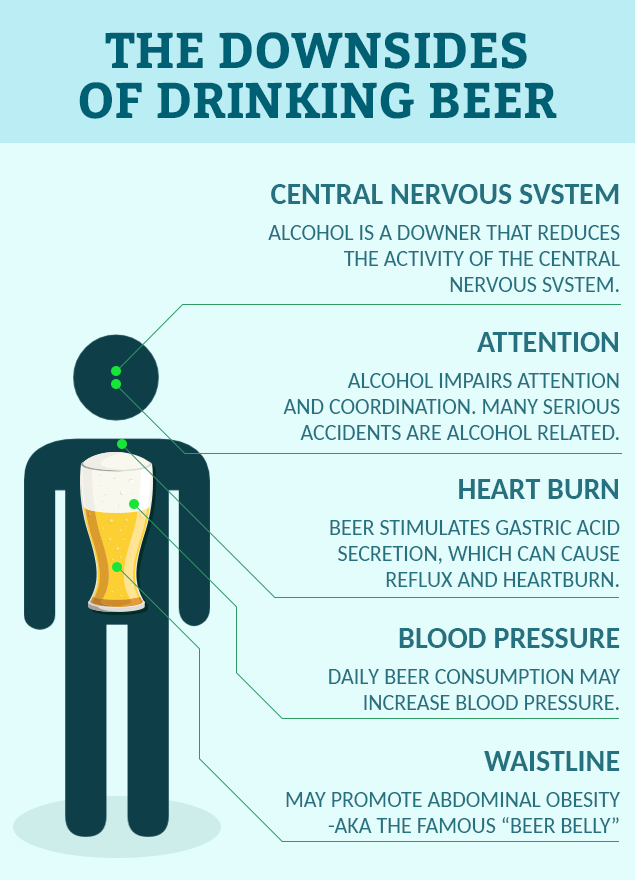 How to Cure Beer Addiction

Beer, like any other alcoholic drink, can be very addictive and after what can be seen about the negative effects of beer, a lot of heavy beer drinkers usually want to get out of their unhealthy habit but find this virtually impossible because they have become addicted to the product already, which is especially widespread in college drinking communities. They find it very hard to stop outright or significantly reduce their intake but no matter how hard this might seem, there is actually hope because, with proper research and studies, it has been shown that beer addiction can actually be cured.  To stop drinking beer or to reduce one’s consumption, a very realistic plan that one could follow advises to:

Recovery is a long hard road and it will take dedication and commitment to finally get to the point where your beer addiction is gotten rid of but it is certainly a worthwhile endeavor. There are many treatments for alcoholism and anyone can find the approach that fits their needs. The alcohol rehab centers provide various approaches to the recovery. One of the most popular methods is an alcohol outpatient treatment. The patients do not need to reside in the facility, they just come to visit the counselor or one of the alcohol support groups.

AlcoRehab » What is Alcoholism? A Complete Guide to Alcohol Addiction » Beer Addiction: Its Effects and Recovery