Fighting Alcoholism with Compassion and Knowledge

Dan, 32, drinks 8 or 9 beers on a weeknight and 3-4 twelve packs between Friday and Sunday. He started drinking in college. The effects of underage drinking start to influence his adult life. However, he insists that he is not an alcoholic because he misses less than a day at work per year. He is also a good worker. But he has been arrested twice on DUI charge and frequently fights with his wife over his drinking habits. He admits that he had tried to quit alcohol before, but he cannot sleep without a drink or two and usually gets jumpy when he has not drunk for several days.

67-year-old Carla lives in a mixed housing project. Visitors have lately been complaining that they can smell alcohol in the room, but Carla does not appear to be intoxicated. They have also noticed that her health is failing rapidly, and she is not cleaning herself well. Often, she has vomit stains on her sleep wear. Her bedding too seemed to be soiled on occasions.

Do you think Dan is an alcoholic? Should he seek treatment? Is Carla suffering from alcoholism?

These are not questions for just Dan and Carla to figure out. When close to 90,000 people die every year in the U.S. due to alcohol-related causes, the onus is on all of us to lend a helping hand. Maybe Carla’s visitors could have taken her to an addiction counselor had they recognized the signs and symptoms of alcoholism. Maybe Dan could have taken an alcoholism self-assessment test if he knew about it.

It is time to learn more about alcoholism stages and alcoholics. Read more to know how to prevent alcoholism.

What is Alcoholism and Who is an Alcoholic?

Alcoholism is the most severe form of alcohol abuse. This happens when a person becomes physically dependent on alcohol. What is social drinking and how does it differ from alcoholism?

The user loses the ability to control or manage his drinking habits and will feel more compelled to drink to feel its euphoric effect and also to avoid the manifestation of withdrawal symptoms. There are many possible alcoholism causes, but the result is always the same.

Common symptoms of withdrawal from alcoholism include:

Contrary to popular opinion, alcoholism is NOT alcohol abuse even though they are both manifestations of problem drinking behavior.

The typical signs of alcohol abuse include:

Abuse progresses to alcoholism when the person develops a physical dependence on alcohol. There are different types of alcoholics, but they all have something in common.T he person feels compelled to drink despite alcohol disrupting his or her normal, daily life. A tell-tale sign of physical dependence is the manifestation of withdrawal symptoms when the person tries to quit alcohol. Abuse can progress to alcoholism quickly without either the user or his or her loved ones realizing it.

An alcoholic is different from a social and a problem drinker. An alcoholic cannot cut down on drinking permanently. He may drink “less” or in a low-risk manner for some time, but eventually, he lapses into his old drinking habits. Beer alcoholism is one of the most dangerous types as it is much more tolerated in modern society. The other big issue is wine addiction – this drink is believed to be useful, and its consumption is culturally acceptable in most of the countries. However, those who want to get drunk will do it anyway with one of the alcohol substitute drugs – even if drinking mouthwash will be the only option available. The other dangerous alternative is making moonshine at home. The process is as dangerous as the consumption.

The statistics on alcohol are disturbing. The incidences of binge drinking and heavy drinking, which are significant risk factors for developing alcoholism, are high in the U.S. Besides the number of alcohol-induced deaths, alcoholism-related diseases destroy hundreds and thousands of lives and careers every year. It has also been proved that an increase in the rate of alcoholism also raises the incidence of violence, especially when speaking about alcohol abuse in the military.

Take a look at the numbers below:

Why is Alcohol Dangerous?

Alcoholism is very dangerous and life-threatening if not treated.

Chronic alcoholics are at risk of damaging their brain cells and causing cognitive impairment, liver disease, and kidney failure.
Although alcohol is not as powerful an intoxicant as other drugs, it can trigger fatal complications in the body when abused.

Now here’s the irony. Alcohol by nature is not a very powerful drug. But if abused, as alcoholics do, it triggers a chain of physiological events that can turn fatal.

Alcohol is a central nervous system (CNS) depressant and is classed as a sedative-hypnotic drug. Here’s what it does to the body:

Alcohol is toxic to the body. It damages the liver and the kidneys and can even cause these organs to fail.

But make no mistake, alcohol can be dangerous in low doses as well.
People have different levels of alcohol tolerance. This varies by age, gender, ethnicity, body type, and individual genetic makeup. The health of a person—the presence or absence of metabolic disorders, for instance—too determines how soon the alcohol effects start to manifest in an individual. Some people go red in their cheeks just after one drink; others are not tipsy even after several drinks.

Because people have different tolerance levels to alcohol, the alcoholic may not always look or act like a “drunk.” He or she may not mumble incoherently or stagger down the streets. The person may also have full control of his or her senses. There are high-functioning alcoholics who hold responsible positions at the workplace and perform their duties satisfactorily and have families and hobbies. They can even cope with triggers of alcohol abuse in some cases. But alcohol catches up with them soon and wrecks their physical and mental health and destroys their ability to sustain healthy relationships. 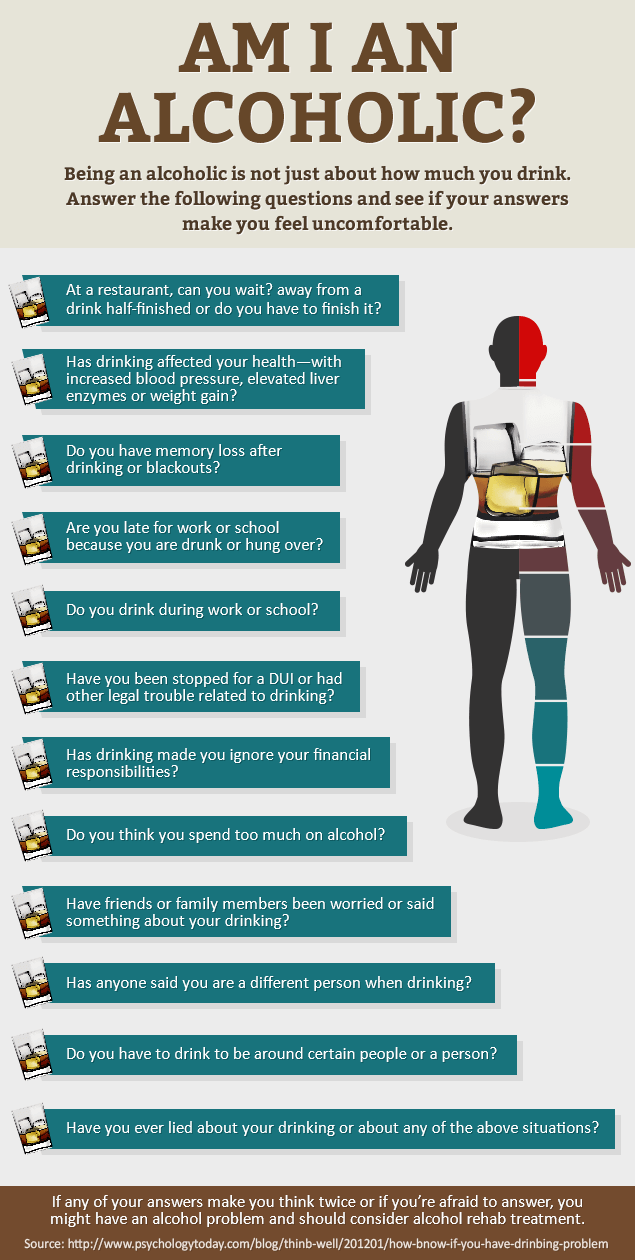 So how do you recognize an alcoholic? You HAVE to, to ensure that you can spot the early warning signs of alcoholism and get help for a loved one before it is too late. Read on to find out how to help an alcoholic family member.

The following are the tell-tale signs of alcoholism:

But just as it is important to know how to recognize an alcoholic, it is equally important that you talk to the person about his or her condition. Convince him or her to seek help in one of the alcohol rehab centers. Alcoholism is a disorder that can be cured with specialized medical alcohol use disorder treatment, encouragement, love, and patience. Alcohol detox is the first step on the way to the lifestyle changes. Even the best books on alcoholism are unable to help without the professional assistance of the medical representative.

AlcoRehab » What is Alcoholism? A Complete Guide to Alcohol Addiction